UNUM is an alumni of the Blue Startups accelerator program. It is a social media manager tool that helps people design, edit, analyze, and schedule posts on platforms like Instagram, Pinterest, and Tik Tok. More than 11 million people and brands in 192 countries have used UNUM, including Kylie Jenner, Marc Jacobs, Halle Berry, Uber and Whole Foods to name a few.

Starting UNUM was in part a stroke of luck: Dillon Morgan volunteered as a photographer at a Venture Capital Event up in San Francisco, pitched UNUM, and received funding and one week later. He teamed up with Jarrett Chen to officially launch UNUM in 2016. 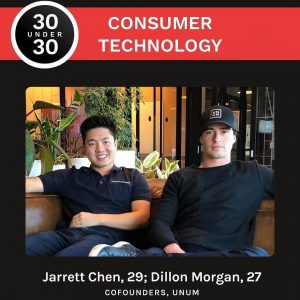